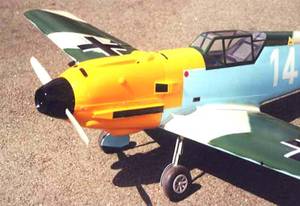 The Wings have been routed to shape for retractable under­carriage  having the full installation worked out for you .

Without a doubt the most famous of all German Fighter aircraft produced during the Second World War, the Me 109  saw action in all European and African theatres. The ‘E’ variant is most renowned for its role in the Battle of Britain, the seminal air battle of the war and, given the critical nature of the times, perhaps the most important. The full size aircraft, powered by a Daimler Benz DB601Aa engine, was capable of a maximum speed of 348mph at 14,500ft. Its maximum operating ceiling was 34,450ft. The model scheme represents ‘White 14’, a recently restored example now flying in the USA, which was flown during the Battle of Britain by Hans-Joachim Marseille. Marseille would go on to score 158 victories from 382 combat missions flying Me 109s. He died on 30th September 1942 whilst baling out of an aircraft that had developed engine failure.

Check out a customers build of the  109 at  rcgroups.com in the warbird forum

The above pictures and information were kindly supplied by David Matthews who converted his kit into electric.
It runs on 8s at about 1400w which is enough for a flying weight of 11 lbs,with electric retracts. Paint is from fighter acres.
It flies superbly

Recommend this to a friend  +